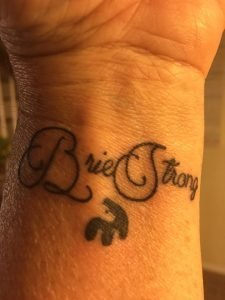 5 days in the ICU

Imagine the despair standing in the ICU watching a team of medical professionals work to save your daughter’s life as she lies in 3 liters of blood (the human body has 5.5) while attached to a ventilator with tubes and ivs all over her body while a chaplain prays and maintains vigil with your family..

Now imagine the joy and blessing of welcoming a perfect new born baby while his mother desperately fights for her life. The terrible mixed emotions of welcoming a new life and saying goodbye to another much loved one are ones I never thought I would experience.

Such was the horrific situation that my husband and I found ourselves in on June 15, 2016. But this story is not about us, but the remarkable woman who is the epitome of grit, determination, spirit, and the many anonymous people who had a part in saving her life.

Her story starts on June 14th, a beautiful early summer day, and my daughter Brienne, who had not been feeling well, had been admitted the night before with pre-eclampsia symptoms…three weeks before she was due to give birth to her second son.

It was determined that her condition had advanced to eclampsia and labor was induced early on the morning of June 14th. Things were progressing slowly when suddenly we heard the words “Code C Room 66” over the intercom. In the blink of an eye, the room was full of nurses disconnecting equipment and announcing that the baby was in distress and a C-section was necessary.

The NICU team was called and Brienne was whisked off to surgery. Within 15 minutes the drs came in to tell us that a perfect baby boy had been delivered and he had arrived “hootin and hollerin”.

We all breathed a big sigh of relief and waited to meet our new addition….and waited and waited. After an hour I went to see what was happening and we were informed that Brienne had started bleeding and would need to go back into surgery. Shortly after we heard “MTP OR 5” repeatedly, and as we watched with anxious hearts from the waiting room, several nurses came running down the hall with lunchmate coolers (we found out the MTP stands for Massive Transfusion Protocol and that the code was for our daughter…and the lunchmate coolers were full of units of blood).

After some time, the drs came in to tell us that they had stopped the bleeding and that Brienne was in recovery. We rejoiced and went to meet baby Jameson. Within the hour the drs came back in to tell us that Brienne was hemorrhaging again and would need a hysterectomy to stop the bleeding. She went back into surgery and another MTP was called for. Needless to say, we were terrified at this point and when the drs finally returned to talk to us, we found out things had progressed from bad to worse.

Brienne had developed a condition called disseminated intravascular coagulation (DIC) which causes blood clots to form and use up the blood clotting factors, resulting in massive hemorrhage and organ failure. She was being transferred to the main hospital’s ICU about 10 minutes away in very critical condition and on a ventilator.

I don’t have the words to describe our feelings in that space of time. Holding this perfect human being that my daughter gave birth to and the child I birthed hanging onto life by a slim thread.

At 1:30 am on the morning of June 15th we stood around her bed and heard the prognosis from the dr. My beautiful daughter was heavily sedated, on a ventilator, receiving blood products, her organs failing, and IF she recovered, she faced months in the hospital.

I went back over to the Womens and Babies Hospital with a heavy heart to check on the baby while my husband and my son-in-law stayed with my girl.

At 5:26 am, my phone rang and my husband’s voice breaking with grief on the other end. “You need to get here right now, she’s still alive, but it’s bad”.

I don’t remember much from the drive except running down the hall of the ICU and seeing a wall of nurses and drs surrounding my daughter’s bed. At that moment, another MTP code sounded, and by now the familiar figures of medical staff running down the hall with coolers of blood were all we could see.

Right at that moment, I knew she was dying (we found out later that that was when she was being resuscitated) and sank to my knees overcome with grief. The calm, cool gynecological oncologist on call sat down with us and informed us that without another surgery immediately our daughter was going to bleed to death.

We were told that she would be going into the hospital’s hybrid operating room to accommodate the numerous surgical teams that would be trying to save her life. At 7:35 am she was wheeled into surgery and at 8:06 am as we gathered in a waiting room we heard “MTP hybrid OR”.

The fourth massive transfusion protocol in 12 hours…our hearts were breaking. For over 5 hours we waited, prayed, and held each other in comfort as the lead nurse came out and updated us periodically. At one point one of the drs came out and said the situation was dire, blood was going out as fast as they were putting it in, but they were not giving up on her.

My dearest friend organized a blood drive that was shared on social media hundreds of times….people from four states away came to donate blood and the hospital had an unprecedented record day of donations. My child was held up in prayer, faith, and love from countless strangers all over the world on social media as the medical teams fought to save her, and even had her own hashtags: #briestrong #briennesabadass

Finally, at 12:36 pm on June 15th, not quite 24 hours after our ordeal started we saw the two head surgeons come out to us and the nurse told us they wanted to speak with us privately. We could read nothing but weariness on their faces and feared the worst. As our family crowded into a tiny room, Dr. Olt sat down and told us that they had stopped the bleeding. She was being looked after by the radiology team to make sure, but they were ‘cautiously optimistic’ and she would be transferred back up to the ICU where we would be able to see her. In almost 35 years of marriage, I have never seen my husband sob as he did when we heard those words.

A few hours later my husband, myself, and my son-in-law gathered around her bedside hardly daring to breathe as we watched the machines keeping this most beloved child alive.

Her lungs were saturated with fluids, her kidneys were in danger of shutting down, and the strain on her heart was tremendous, but she was alive.

During this time Brienne received:

14 vascular coils in surgery to stop the hemorrhaging

Because every blood type was used during the MTPs, her blood type changed from A negative to O negative.

While she was on the ventilator she communicated to us that she wanted to try to pump milk and in the midst of all the machines was a breast pump so the nurses could expel milk for the baby.

We had been told she would be in the ICU for weeks, but four days later she was transferred back to Womens and Babies Hospital where she got to meet her son for the first time in almost a week.

She went home a full week after her ordeal started.

We are blessed that our story has had a happy ending. In a strange twist of fate, we later found out that June 14 is World Blood Donor Day and we have become passionate advocates for blood donations.

Brienne’s story is a powerful reminder that with just 60 minutes of your time, you can literally give someone else the gift of life. This time of year the need for blood becomes critical, with people traveling more, and enjoying more outside activities, blood donation becomes vital and blood banks experience severe shortages in the summer months.

Someone needs blood every 2 seconds

One pint of blood can save up to 3 lives

17% of people of non-donors cite that they never thought about donating, while 15% say they are too busy…we need to change this statistic.

Giving blood is one of the easiest and fastest ways that a person can give back and save a life.

We believe sharing Brienne’s story can give a face to the power of spending just 60 minutes every 56 days to give back in a big way.

In just one hour you can save as many as three lives all while having a snack and sitting in a recliner playing Candy Crush, Facebooking, or meditating on whose life you may have just saved.