In the online space, there are many words that are tired and overused.

You know…those words that for whatever reason, cause you to grit your teeth and immediately make you tune out to the rest of the message.

I’ve got a couple in mind for myself, but today I’m taking aim at the word ‘badass’.

For some reason, I have felt like I am seeing the word everywhere lately…the fact that it’s a new year may have something to do with it I’m sure.

Errrrybody and everything is badass nowadays.

I poked around to see what definitions I could find for the word…what does it mean to be a badass anyway? And here’s what I found:

a tough, uncompromising, or intimidating person 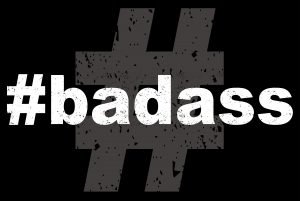 the epitome of the American male…an ultra cool mofo (seriously??)

difficult to deal with; mean-tempered, grouchy

ready to cause or get into trouble

of formidable strength or skill

a person whose extreme attitudes, behavior, or appearance are admirable

Of all of those, my favorite one is “of formidable strength or skill”

Most of the time, when I see people use the term ‘badass’ it’s in reference to hustle, grind, take no prisoners, or to be a badass business owner. It’s become a word that makes your eyes glaze over…after you’ve done the obligatory eye roll at yet another reference to a program, business, or mindset that describes itself as ‘badass’.

When I refer to Seasons of Your Brand, the ‘badass’ season is one we all go through…in the archetype world, this would be the Rebel, the Revolutionary, the Maverick, the Lone Wolf…the challenge to the status quo. At some point, we want to identify with being a badass….there’s an appeal of wanting to have a ‘badass brand’ or a ‘badass business’…hell yes, sign me up…and then you realize that that particular definition of ‘badass’ doesn’t fit you at all.

So no, I don’t want to be a ‘badass’ in 2017 by any of those definitions, thankyouverymuch.

In fact, here’s what I’ve noticed about women who really are badass:

She would probably never call herself that, and yet…

She is the woman who has strong beliefs and isn’t afraid to stand on them, despite peer pressure

She doesn’t need to be extreme in her attitudes, behaviors, or appearance to be admired…nor is it something she focuses on

She is the woman who believes in herself unconditionally

Her definition of ‘hustle’ is one she defines for herself

And the irony…a true badass doesn’t consider herself one.

She goes about the business of doing her great work, sharing her message, serving her Right People, and making the impact she knows she is here to make.

And that my friends…is very badass worthy