OK, so this is not going to be my usual type of blog post:-)  Today is special because it is my youngest son’s 16th birthday….obviously not a big deal to you, but to me, his mother, it is a time of reflection and gratitude.

I’ve been out of the loop the past few weeks as I have been in the hospital dealing with some significant health issues.  All is well and I am on the mend, but again, my poor blog has been sadly neglected.  I actually purposely waited a few days because I wanted to “save” my first post back in honor of Garrett.

I’d like to tell you a little bit about this kid of mine, and how by his very existence he teaches me all the time.  Garrett was not at all planned (indeed after 2 very difficult pregnancies, we were told “no more”); God, however, had other plans for us and we were thrilled that we were going to be blessed once more (3 was the original number we had talked about and that I had visualized for just about forever!)

This third little bundle was born during the Ides of March (or as we in the Northeast call it: The Blizzard of 1993!)  We actually had to drive our 4 wheel drive vehicle through fields to get to the hospital along with volunteer firemen and township supervisors…quite an arrival!  Indeed while this last pregnancy was rather uneventful compared to the last two, he did give us a bit of a scare with the cord being around his neck; but was delivered healthy and looking somewhat like Walter Matthau!

As if to make up for his rather tumultuous beginning, Garrett has moved through life with an effortless grace and easy disposition.  We often joke that we need to take a pulse check as he is so very mellow!  He has brought us much joy and sometimes I feel like my heart will burst when I look at him, hear his laugh, or his voice that is becoming deeper and more mature.

*Disclaimer:  I feel this way about ALL my children, but today is his day:-)

As I watch this boy grow into a young man, it is truly with joy and gratitude, but with a twinge of bittersweetness too.  I miss the little guy with the redheaded bowlcut, who called his older brother Go-Go (we have NO idea where that came from as Tyler is anything but fast!), who thought his sister’s rabbit would be so much cooler with a mohawk (we did rescue it), and well, you get the picture. 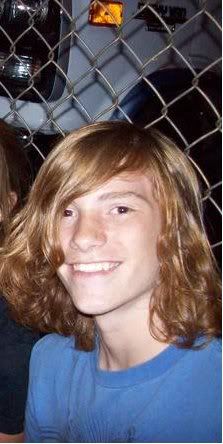 This youngest child is a magnet for gathering people to him with no apparent effort and is incredibly comfortable in his skin (picture a blue leotard with white stars playing football); just because he thought it would be funny.

A beautiful smile, a gentle heart, an awesome sense of humor, an amazingly keen, analytical mind, and a charismatic personality: all traits that will take him amazing places in life; and the coolest part is that I get to watch it happen:-)

Now lest you think I am an unbelievably biased mother (well I am), he does have quirks that save him from too much adulation!  He takes incredibly long showers (like 40 minutes) and it is only when he broke the shower wall (in MY bathroom!)  that I found out my darling cherub actually falls asleep while he’s in there!  He still refuses to eat most vegetables unless I can hide them in some way and moves at what we can only term as “Garrett speed”; no matter how much pushing, prodding, poking, and impatient foot tapping he is given.

He needs reminders to pick up the glasses, cereal bowls, plates, etc, that end up in the family room, computer room and his room on a regular basis.  He’s a little obsessive about his clothes and if he wears something for 2 hours, it ends up in the wash.  He gives the appearance of being very graceful, but will often fall up the steps at home.  His hair has almost become it’s own entity and I’m afraid if he cuts it now, he’ll be like Samson and will lose all of his powers~lol.

I’m somewhat shocked to find myself in the position of having the last born child now in the process of obtaining a driving permit and gaining a whole lot more independence.  I’m still sort of asking myself how did this happen?  and when?  and where was I while this was going on?

And so my precious son, I wish you the happiest of birthdays and tomorrows; your future is so bright you definitely need some shades!  I feel blessed, joyful, appreciative and thankful for the light and brilliance you bring into our lives each and every day~